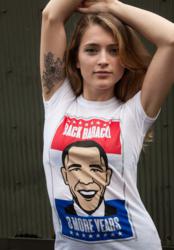 There is a new kind of voter in response to the Supreme Court’s ruling on Citizen’s United.

Fri 9/7/12 The New American Brian Koenig quotes Tony Shalhoub speaking at the DNC in Charlotte NC regarding Citizen's United, "It's dollars over the actual voice of the people". Dahlia Lithwich Jan 21, 2010 "The Pinocchio Project" said of Justice John Paul Stevens as he read a partial dissent, "you can plainly see the weariness in Steven's eyes and hear it in his voice today as he is forced to contend with a legal fiction that has come to life today, a sort of Constitutional Frankenstein moment when corporate speech becomes even more compelling than the 'voices of the real people' who will be drowned out". Back Barack LLC's opinion is that "the Supreme Court’s decision to allow Corporations and their aggregate wealth to finance political campaigns is great for a plutocracy but an affront to democracy and a direct attack to the people’s voice in this election". They feel although they may not have the millions and billions of the Koch Brothers, Sheldon Adelson, Foster Freiss, or Wall Street to name a few, they do have a vote and a voice. Unabashed and unapologetic, their message, “8 More Years”.

This is the first official statement of Back Barack LLC as they launch a new website and original "Rock Your Barack Vote" gear. They further opine that "repairing the state of the economy the President inherited requires time. 'Witness President Franklin Delano Roosevelt who was elected to 4 terms during an economic depression and World War II'. 'The fragility of the current economy demands stability.' 'The path to economic recovery that was started with President Barack Obama in 2009 must continue."