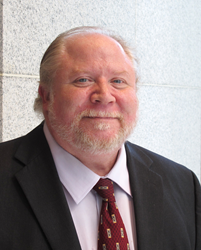 Eric Newton, a global leader in championing transformational digital innovation in the news media as an executive of the John S. and James L. Knight Foundation, is joining Arizona State University as the innovation chief of the Walter Cronkite School of Journalism and Mass Communication.

Newton, who will hold the faculty rank of professor of practice, will work closely with the school’s leadership to drive new, cutting-edge ideas and initiatives at Cronkite News, the school’s multiplatform daily news operation. Cronkite News will serve as a test bed for news industry innovations and experimentation while providing critical content to news consumers in Arizona and across the country.

Newton will continue to serve Knight Foundation as a consultant working on special projects and endowment grants. In his nearly 15 years at Knight, Newton expanded the foundation’s journalism and media innovation program, overseeing the development of more than $ 300 million in grants, $ 160 million of which went to universities for pioneering projects in journalism education. For the past four years, he has been senior adviser to Knight Foundation President Alberto Ibargüen.

“In the past decade, the Cronkite School has become one of the best, most innovative journalism schools in the country,” Newton said. “Now it has an ambitious goal: to transform journalism education — and to some degree journalism itself — with a stream of digital news experiments and inventions. This will be a built-out version of the teaching hospital model, with Cronkite News, a converged news organization in a major media market, as its platform. That’s a tremendously exciting challenge. If we are successful, we will do things in journalism education the likes of which the world has never seen.”

Newton developed grants for groundbreaking initiatives such as Poynter Institute’s News University, the largest online journalism training portal in the world, and Sunshine Week, an annual national observance of the importance of open government.

His work was central to the creation of the Carnegie-Knight Initiative on the Future of Journalism Education, a high-visibility consortium of leading journalism schools dedicated to transforming journalism education at the university level. The initiative produced the landmark News21 program, headquartered at the Cronkite School, in which top journalism students from across the country investigate issues of national significance. Since its inception in 2006, nearly 500 journalism students have produced investigations that have captured numerous professional and collegiate awards and appeared in major outlets including The Washington Post, USA Today and NBC News.

In his new role at Cronkite, he will lead innovation projects at Cronkite News, the news organization that includes 15 full-time faculty editors and hundreds of students. Cronkite News includes a nightly television news broadcast on Arizona PBS, digital reporting bureaus in Phoenix, Washington and Los Angeles, a business reporting bureau, an entrepreneurial digital innovation lab, a digital production bureau and a newsgathering and civic journalism bureau.

“Eric is an internationally recognized leader in the digital transformation of journalism over the past 30 years,” said Christopher Callahan, dean of the Cronkite School and CEO of Arizona PBS. “He also possesses a deep understanding of journalism schools and universities. I can’t think of a better thought leader to be driving disruptive innovation and experimentation in our Cronkite News journalistic teaching hospital.”

At Knight Foundation, Newton’s team launched in 2007 the nationally recognized Knight News Challenge, a media innovation competition that funds breakthrough ideas in journalism. The challenge, designed to open up digital media to innovative ideas from anywhere, went on to attract more than 10,000 applications and provide more than $ 37 million in funding to 100-plus projects.

“Eric’s tenacity, know-how, enthusiasm and love of journalism have helped drive our program into the 21st century,” said Ibargüen. “He also has been an extraordinary and imaginative counselor to me on many subjects. I'm sorry to lose my office mate, but I know that this is good for Eric and his family and great for Arizona State. Since he will continue as an advisor to Knight, it's good for us, too."

Newton wrote or edited numerous works on journalism, including “Searchlights and Sunglasses: Field Notes From the Digital Age of Journalism,” which doubles as an interactive textbook. He holds a master’s degree in international studies from the University of Birmingham in England and a bachelor’s degree in journalism from San Francisco State University.

About the Walter Cronkite School of Journalism and Mass Communication

The Walter Cronkite School of Journalism and Mass Communication at Arizona State University is widely recognized as one of the nation’s premier professional journalism programs. The school’s 1,700 students regularly lead the country in national journalism competitions. They are guided by faculty comprised of award-winning professional journalists and world-class media scholars. Cronkite’s full-immersion professional programs give students opportunities to practice what they’ve learned in a real-world setting under the guidance of professionals.

About the John S. and James L. Knight Foundation