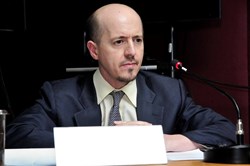 The European Commission recently released a legislative proposal on structural reform of EU banks following two years of work by a High-level Expert Group HLEG, chaired by Erkki Liikanen, Governor of the Bank of Finland. In response to the proposal, European Commissioner for internal market and services, Michel Barnier, says, “This legislation deals with the small number of very large banks which otherwise might still be too-big-to-fail, too-costly-to save, too-complex-to-resolve.”

Analysis offered by international economist and lawyer Aldo Caliari, director of the Center of Concern’s Rethinking Bretton Woods Project, challenges the European Commission’s claims that its proposed measures will "further strengthen financial stability and ensure taxpayers don’t end up paying for the mistakes of banks.” Caliari says, “While the EU is barely emerging from a recession and its citizens continue to feel the pain of job losses and the removal of services, the European Commission's proposals fail to offer the energetic action that is required to avoid such transfers of private risk to the public sector in the future.”

Putting the need for stricter legislation into context, Caliari says, "Since the beginning of the crisis, more than USD 400 billion have been spent by governments in rescuing banks, in addition to commitments of monetary support offered by the European Central Bank."

Referenced in an European Union press release, February 12, 2012, the HLEG mandate asked the group to pay particular attention to reducing the risks of the banking system as a whole, reducing the risks that individual firms pose to the financial system, reducing moral hazard by making market exit a viable option also for largest and most complex institutions and thereby reduce government guarantees, promoting competition, and maintaining the integrity of the internal market.

According to Caliari, the legislation fails to meet the Commission stated objectives. Caliari says, “This was a missed opportunity. There were good ideas that the Commission could have built upon in order to ensure the separation of speculative and deposit-taking activities on a consistent basis across the European banking sector. But the Commission’s proposal will give those banks a pass to continue playing in the market with the money of depositors and taxpayers.”

Founded in 1971 at the United Nations, the Center of Concern's experts contribute research, education, and advocacy from Catholic social tradition in order to create a world where economic, political, and cultural systems promote sustainable flourishing of the global community. The Center touches centers of influence through its core competencies: ecology and development, faith and justice education, global women's issues, and multilateral finance and human rights.