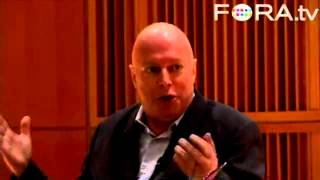 Christopher Hitchens, Peter Beinart, George Packer.
The panel discussed America's position in, and relationship to, the rest of the world under Obama and whether or not his foreign policy has been effective.

What kind of foreign policy will the world's second largest economy pursue under Xi Jinping's leadership and what will be the focal points? Linda Jakobson, East Asia Program Director at the Lowy Institute for International Policy, assesses the main foreign policy challenges facing China's new leaders. She also elaborates on recent foreign policy appointments made in the government realignment following the National People's Congress and sheds light on the implications of the make-up of China's foreign policy leadership.

Linda Jakobson has lived and worked in China for 20 years and published six books about China and East Asian society. A Mandarin speaker, she has published extensively on China's foreign and security policy, the Taiwan Strait, China's energy security, and climate change and science & technology polices.

Prior to joining the Lowy Institute, Ms Jakobson served as Director of the China and Global Security Programme and Senior Researcher at the Stockholm International Peace Research Institute (SIPRI). From 1998 to 2009 she worked for the Finnish Institute of International Affairs.

Ms Jakobson was a Fellow at the Kennedy School of Government at Harvard University in 1990. The Finnish edition of her book, A Million Truths: A Decade in China (M. Evans, New York, 1998) won the Finnish Government Publication Award. Her SIPRI Policy Paper, New Foreign Policy Actors in China (co-authored with Dean Knox) was awarded an Alibi in 2010. She has written two Lowy Institute publications: Australia-China Ties: in Search of Political Trust (2012) and China's Foreign Policy Dilemma (2013).